Fanboys cringe. Last year, Mitsubishi revived the Eclipse moniker and hung it on a crossover. Perhaps in an effort to capture the market of folks who drove the sporty-looking coupe during their youth, and now need a back seat to haul their progeny. But why would Mitsu introduce yet another mid-sized cross over into a crowded segment when they already offer the Outlander Sport?

Chances are we all knew someone who drove the old Eclipse, or at least there was one on the high school parking lot. It had a coffee-can exhaust and ill-fitting, primer-colored body kit and peeling tint. “I’m gonna get a turbo kit with my birthday money, or maybe a 4G63 swap” the pimpled the adolescent owner would say before over-revving it while slipping his much-abused clutch lest he stall the engine while trying to look dope. He would pull away leaving only a stain from the many leaks and the smell of burned clutch. With few exceptions, these cars were neither very fast nor very furious.

Inside the Eclipse Cross, a seven-inch touchscreen in the center of the dash controls the nav and the Apple CarPlay and Android Auto compatible stereo. Audiophiles will appreciate the 710 watt, nine-speaker Rockford Fosgate audio system replete with a ten-inch subwoofer in the back. Just like high school! 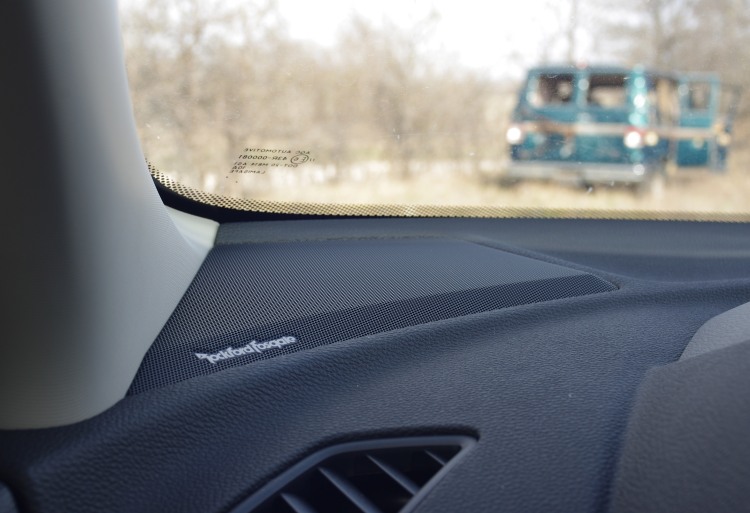 Even with the leather appointments in the SEL trim level, there’s a certain plasticy feel to the cabin. But it’s hard to find anything wrong with the fit and finish though. It has a modern design that’s well executed and logically laid out. Interior room is good, and cargo room, while not the best in class, is adequate. Front and rear heated seats are a treat in the cold weather and the driver has the option to turn on the heated wheel. 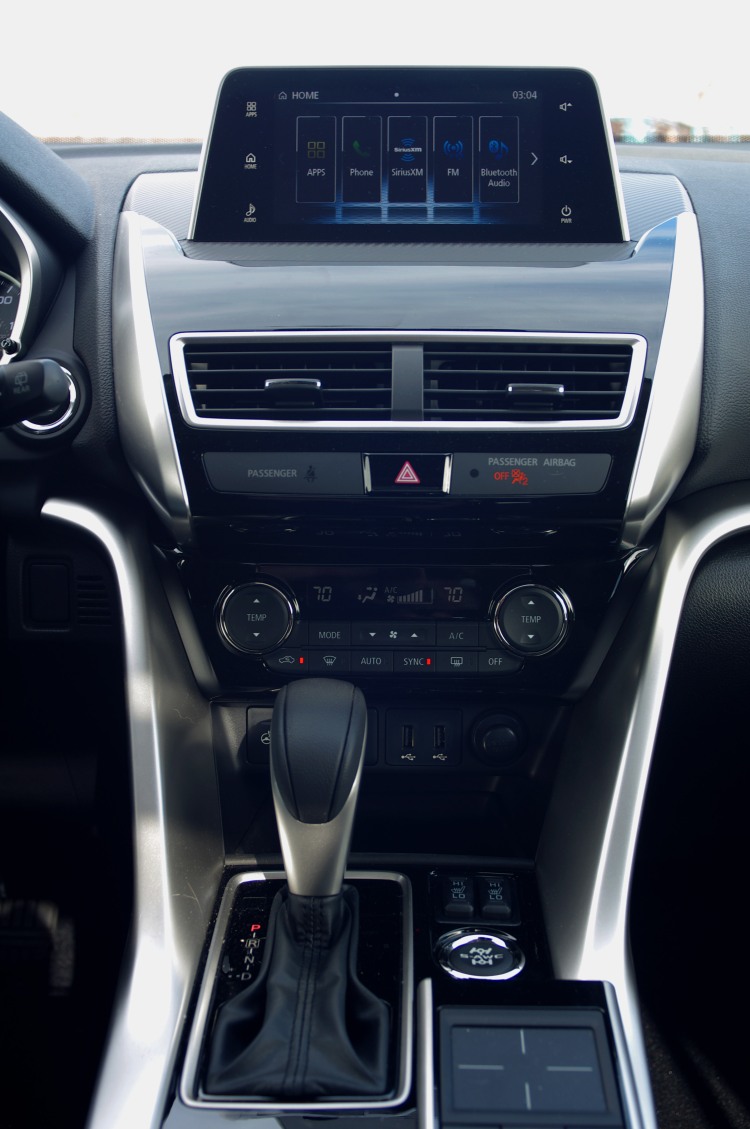 In the console, there’s a touchpad that looks like it was lifted directly out of a Lexus product. “So what,” you might say, “Lexus is nice, I want nice things.” It’s meant to mimic the way we easily swipe around between apps on our devices. But the layout falls tragically short of that mark. It’s practically impossible to use while driving, and really needs to go the way of Beta tapes and eight-track cassettes. One only hopes it doesn’t spread like a virus to other manufacturers.

The Eclipse cross looks good. It uses design elements that immediately establish that it’s from the Mitsu livery. It also seamlessly incorporates features from other marques. Thankfully, Mitsu hasn’t given in to the jumbo badge fad found on so many other cars. 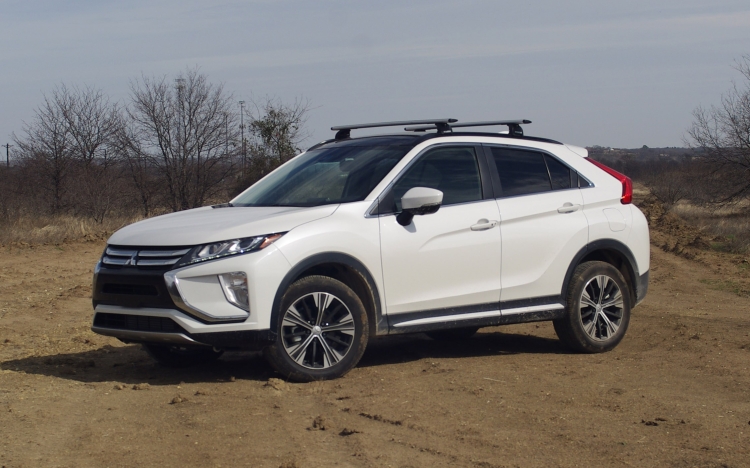 It has a blocky, contemporary aesthetic that is cohesive from bumper to bumper. More than one person commented on the wheels during the week I tested this car. And for good reason. The 18-inch alloys are an especially dashing design.

All-wheel drive means that you won’t worry if things get a little slick out. This Eclipse cross was up-fitted with the option Mitsubishi roof rack rails. It’s a $380 option that not only looks the part, but it adds some functionality to this ride. 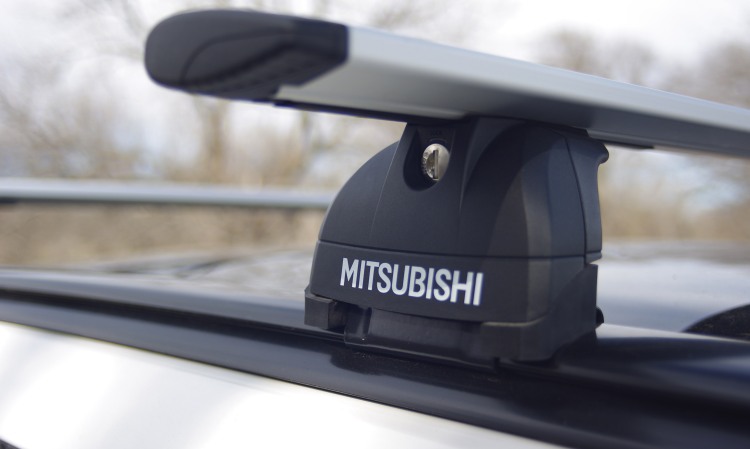 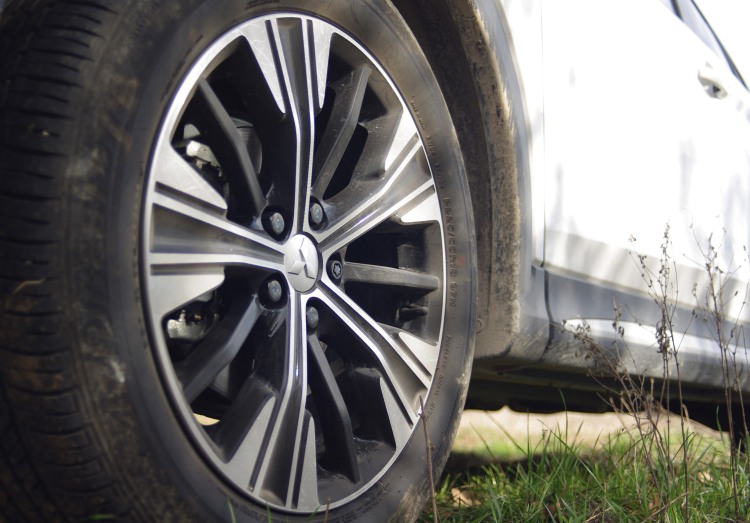 The 1.5-liter power plant under the hood churns out 152 horsepower, which is then dispersed to all for wheels via an eight-speed CVT automatic. This gets the car up to sixty in a not-so-swift eight seconds and change. As for the ride, it’s a little noisy and you can sense some top-heaviness in the corners. However, it’s surprisingly good off-road. I didn’t put it through any mud or snow, but in the rutted and gravely terrain of the photoshoot location, it scrambled around without missing a lick. 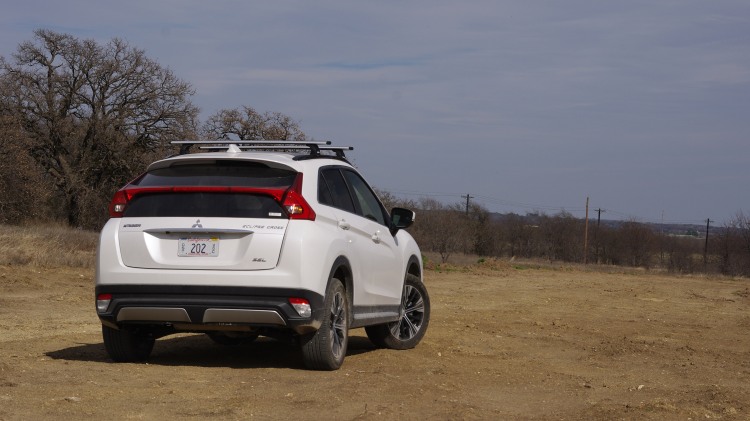 Now, this may only be an issue with this particular car, but the sunroof emitted a whistle at freeway speeds which forced me to keep the moon roof portion closed. Sometimes the press fleet cars get their fair share of abuse and age prematurely. I keep this in mind when I drive them. But when I checked the odometer at the end of my test it read 450 miles. Of which, close to 200 were mine.

Basically, this car breached the womb of the Mistu plant and slid into my driveway on a slick of its own amnion juices. That is to say, it was rather new. To have this sort of issue this early in the game leads me to believe these problems will only multiply or get worse. Of course, if you buy one a repair would probably be covered under warranty.

This is not a bad car. However, it falls victim to the Mitsubishi  “more stuff is better” mentality. It has too many trinkets and gimmicks. Rather than a flip-up HUD screen or a sub-woofer, even though they’re fun, let’s have a sunroof that doesn’t whistle, or some more horsepower, or some more sound deadening. A long list of features looks good next to a bargain price looks good on a window sticker, but tightening up the basics would go a long way toward making this a better driving experience.

The Eclipse cross starts at $23,595, which is on the inexpensive side for a five-seater crossover. For an Eclipse Cross dolled up like this test car, one can expect to shell out just north of $30,000. This is still less than comparably equipped competitors. Mitsubishi appears to have faith in their latest offering too. They’re standing behind it with a 10-year, 100,000-mile warranty. That’s about as good as warranties get. But we don’t drive warranties, do we? So, it really comes down to the feeling this car gives owners. My advice: Test drive it and then the comparable Nissan and Mazda to see for yourself.