After wrapping up the brake system tuneup on the 1949 Ford I started looking for the next challenge. Maybe for the first time since I bought the car, I didn’t see a good reason I couldn’t just drive it. For a 70-year-old car, it starts and runs with shocking reliability.  Now that the brakes are all sorted out, it stops too. I wondered if I could manage to use this old car as my daily driver for a week. How would it fare on roads after seven decades of innovation? 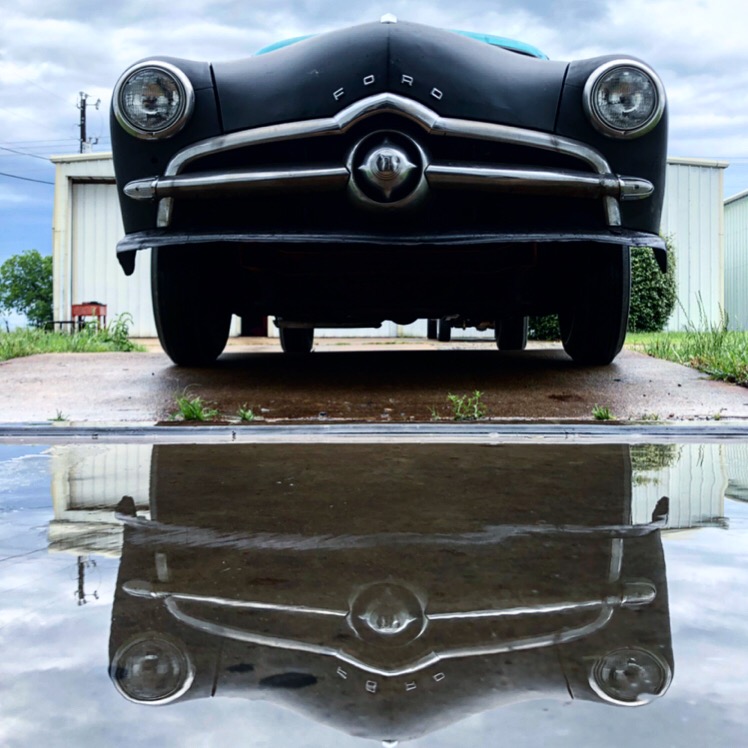 First, a little about my car. I bought it in the summer of 2012. At the time I was working in a high-end exotic car restoration shop. Every day I saw magnificent machines, in various states of restoration. Year after year these cars stayed in the shop, away from their owners and off the road. The game was to create a car that simultaneously indistinguishable from a factory fresh example while being a cut above in every way possible.

That was NOT the kind of car I wanted. I looked for something I could drive now and fix up as I went. I found a car that was as far away from the cars at work as possible. What I landed on was a clapped out ’49 Ford, which I managed to drive home. Slowly, over the last seven years, I’ve improved the car a little at a time. If you’d like to read a more detailed account of the work I’ve done, you can visit my restoration blog here: aaronstarnes.com/blog

The lack of interior was the initial draw for me. It looked like a blank canvas on which I could learn to ply my intended trade. The exterior was a two-tone black and green and every panel had at least one rust hole. The engine, a 239 cubic-inch flathead V8 which had 100 horsepower when it was new. That’s backed up by a three-speed manual transmission with three forward speeds. The car has manual drum brakes all the way around and a top speed of about 70 mph. My mission for the week was to find out if this antiquated heap could hang in modern traffic. 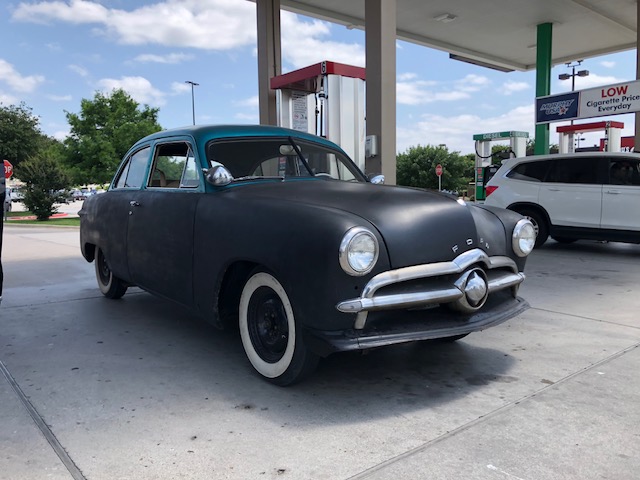 The old car is a little awkward in parking lots because its turning radius is not that of a new car.  It gets lots of smiles. I was pulling into a supermarket and a lady offered to trade for the car. I said, “what you got?” She said, “I’ll give you my husband for the car.” He looked strong and capable, but I thought I’d hang on to the car.

I looked forward to the commute to the shop. I left home and the mundane task of going to the bank was made more interesting because of the Ford. First gear has straight cut gears, which means you can’t down-shift to first unless the car is practically stopped. Even when stopped, about a third of the time you get an audible grind.

The wind noise is outrageous. It’s so loud. Probably because my interior is incomplete. I don’t have the appropriate weatherstripping for the doors or the windlace installed.

I turned right through an intersection and a guy hung halfway out of his driver’s window waving both arms and screaming about my car. I guess it was a compliment, but it looked like he was warning me about an engine fire.

The car just works. Drove home in the rain. Thank you rain-x! The wipers are terrible. They run off a vacuum system that uses the constantly fluctuating negative pressure from the engine’s intake manifold. They weren’t great from the factory and 70 years of wear have done them no favors. Plus, the driver’s side snapped off anyway. 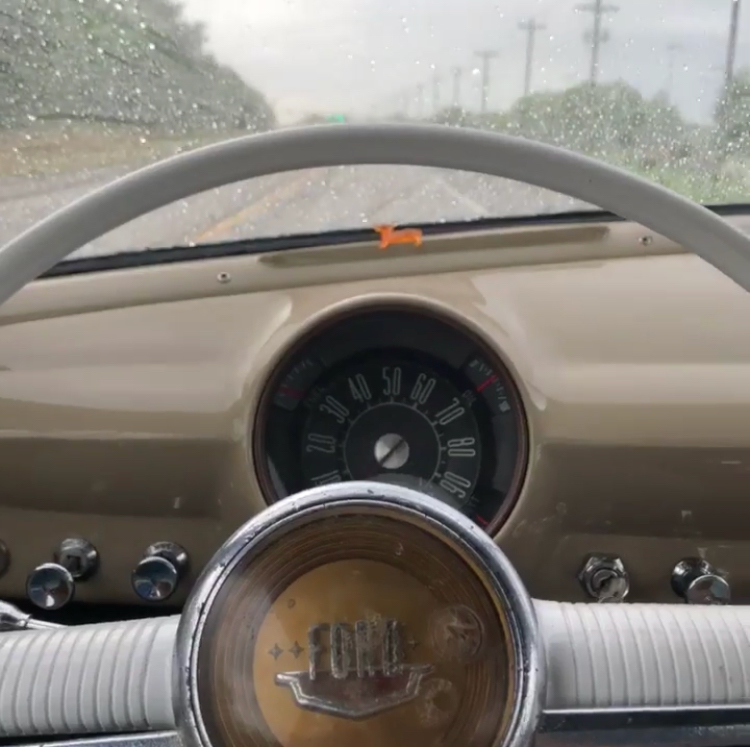 The stakes are higher when you drive a car like this. It felt like riding a motorcycle because I was more vulnerable. It has no airbags, no ABS, no crumple zones, and no factory seatbelts. Old cars also have a charming reputation for impaling people with their steering columns during collisions. The only safety restraints in this car are 3 point belts that I installed myself, and I’m not an engineer.

I created an aluminum block-off plate to cover the hole in the firewall where the heater valve mounts. Hot air from the engine compartment would pour in through this hole.  mine leaks. With this blocked off, the fresh air vents do a pretty good job of cooling the car. I also replaced a fuse for the tachometer and hooked up the speedometer cable.

I worked late this day, and the drive home after dark was lovely.

It’s always something with old cars. You either like it or you allow it to become a nuisance. My temp gauge read null on the way to work this morning. I didn’t worry about over-heating because the car had been so consistent all week. Looks like a wire came loose from the gauge pigtail I made.

It was cool and drizzling that evening after work and the drive home was pleasant. 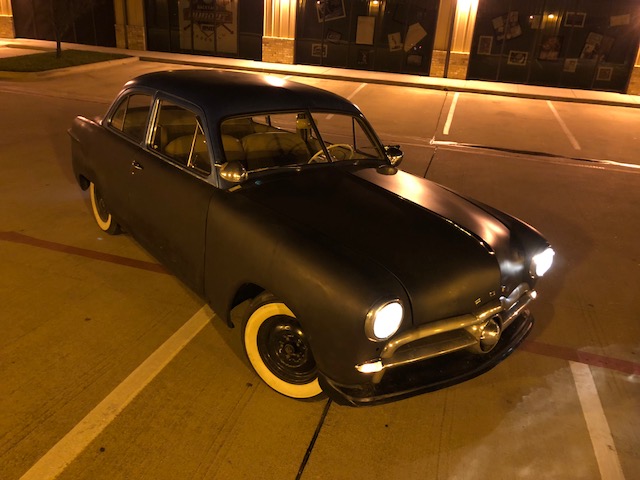 This was the fulfillment of the dream I think anyone who buys an old car has. And that is to actually drive it around. This was the most amount miles I’ve ever put on it consecutively, about 200 miles including the commute and errands. It really never complained. It had a couple small issues, but never the catastrophic failure I half expected from the elderly powertrain. So, can you daily a 70-year-old car?

Of course you can. However, you have to limit your expectations to the car’s capabilities. My old Ford made me proud this week. But I had to adjust my driving style. Rather than taking the interstate, I left early and took back roads. You also have to account for looky-Lous and all the waving back you’ll have to do. Driving the car becomes an event. You’ll look forward to the commute, even if it is just to work and back.

Full disclosure: I did make one emergency trip to Ft. Worth from my shop to my upholstery supply store. The Ford could have made the 60-mile round trip but it would have taken half the day to get down there and back on back roads. My pickup can bomb down at 80 mph, in my truck that week.

One thought on “Can You Daily Drive a 70 Year Old Car?” 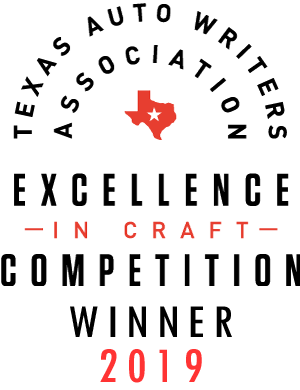